A week’s walking following the coast, castles and Coquet river beckoned as we rolled into Rothbury, some 30 miles north of Newcastle upon Tyne. The town was in full swing with the local pipe band touring the pubs of the town. It always seems a touch fraudulent to be drinking on the night before the walk but as ever we made an effort boosted by the prospect of four SIBA guest beers at the Queen’s Head.

Sadly Whatpub let us down – it was a roll-call of Deuchars (surely the northern equivalent of Doom Bar), Pedigree and Abbot. On the drinking front it was a disappointing night for local beer. The Turk’s Head was packed to the rafters with the pipe band and its followers, suggesting it was the best pub in town although the beer range didn’t excite. We pondered the dead hand of limited beer selections available to Punch-drunk tenants.

Ever hopeful we strode off on our circular mixture of the Inn Way to Northumbria, St Oswald’s Way and St Cuthbert’s Way. We started to get a feel for the big Northumbrian views we could expect in the week. We crossed the Coquet onto the old railway line high on the southern bank of the river – on the far side was William Armstrong’s Cragside. We passed over the river at Weldon Bridge. The spick and span Anglers Arms was open for business but with a long walk ahead we pushed on, now on the north bank.

Felton was a welcome sight – after 12 miles we strolled by the attractive church with a hidden roof, dating from the 12th century, and it was a toss up between the Northumberland Arms or the café. The beer pulled us in and although it was gastro pub/restaurant the beer and welcome was perfect. The ruby Curlew’s Return and Golden Plover were superb. Not a surprise given that Allendale never disappoints. We’d be back later. 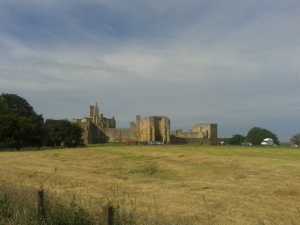 As ever you never get a finger post when you need it and we added a few wayward miles via Acklington before seeing Warkworth Castle ahead. A beautiful village with the Coquet looping round and the castle (much improved by Edward II to keep the Deuchar drinkers out) looking down the hill. Our billet for the night was the aptly named Sun Hotel across the road from the castle. Our evening was a pint of the reliable Cumberland Ale in the Hermitage Inn followed by a few pints in the bar of the Sun Hotel – the friendly brewery tap for Alnwick’s VIP brewery. Whilst a wedding party had demolished their beer supplies they managed to roll out their Village Copper – a good standard bitter.

Over the river with a prospect of beach walking ahead, we strode on to Alnmouth wandering through links golf courses (most of them welcoming visitors for tea & lunch) and the dunes. A sunny walk around the estuary of the Aln and a welcome cuppa in the Tea Cosy café. Alnmouth looked in fine form – all very prosperous and  good-looking pubs just when they were closed. We pressed on – more golf and at last the chance to stroll along the huge Northumberland beaches with gannets diving offshore.

The village of Craster offered more tea, and the kipper smokehouse blackened by the years but still in fine form as our later breakfast would confirm. Dunstanburgh Castle ahead and grand views over Embleton Bay. Now came the difficult part of the day. Could the boys be persuaded to ignore the turn to Embleton (our stop for the night) or press on to one of my favourite pubs, The Ship at Low Newton-by-the-sea?

We moved on with me facing punishment if it was closed. 4.30pm on a weekday and it was in its usual busy but gentle swing. At the back of a horseshoe of NT cottages, almost on the beach and with its own brewery it never disappoints. A pint of their blonde Sandcastles at Dawn and a half of the dark wheat beer, Sea Coal made it difficult to stir but it was back through the dunes to Embleton. The Grey’s Inn was a proper pub with plenty of hand pumps but why so many blonde beers. I was saved by the Alnwick Amber – as the brewer says “an all day session ale if ever there was”.

Fuelled by a breakfast of Craster kippers we looked forward to a gentle stroll through the dunes and along the beach – a day of sand and castles. We walked through the nondescript Beadnell and back on the beach to Seahouses. Despite the amusement arcades it’s not a bad place for fish & chips by the harbour and a pint of Cullercoats’ Lovely Nelly in the Olde Ship Inn. Room after room stuffed full of nautical memorabilia – quite a dusting job.

With Bamburgh Castle ahead. the Farne Islands and Holy Island in view, the next stretch has to be one of the UK’s finest beach strolls. 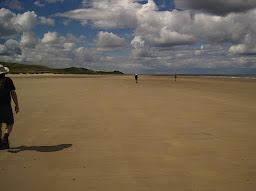 Not a bad place to stroll

A place to ignore the ridiculous inland coastal footpath route. An early finish and we sat in the sun watching croquet on the edge of Bamburgh cricket ground. As one of the gang said, Chris Gayle would love to get the ball over the castle walls. We stir ourselves for Bamburgh’s fine tea rooms and a small piece of cake. A night in the Wynding Inn – good gastropub food and couple of local ales – Hadrian and Tempest breweries. 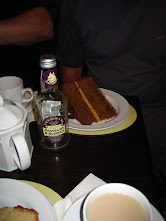 We resisted the temptation of a lift from our B&B host and made a damp start and trudged along the road westwards but we were soon rising up and gaining views, reaching Outchester Ducket – a solid 18th century tower. A walk through sheep fields brought us to the warnings of the footpath crossing on the East Coast Mainline. Phone the signalman or dire consequences with 100mph trains will result. Permission to cross granted and thoughts of non-English speakers finding themselves on the front of the 10.20 to Edinburgh. A run across the A1 and a quick cup of tea at Belford golf course and on through the attractive village.

Now at our most northerly point, with spectacular views over the coast and Scotland, we left St Oswald and battled our way along footpaths through Forestry Commission land (oh the irony of a sign saying ‘Walkers Welcome’) and emerged wrongly at the base of the Colour Heugh rocks. After much scratching of heads we caught up with St Cuthbert, minor roads bringing us to Westwood Bridge over the River Till. Our destination of Wooler was in sight but only for a moment as St Cuthbert sent us up the moorland path. We tumbled through the bracken and emerged at the Wooler Milk Bar for vital refreshments.

A wonderful B&B for the night, The Old Mill, and ready to explore the delights of Wooler. A pint of Hadrian Border’s Tyneside Blonde (we were expecting to see brown roots showing through) was the local choice. Odd to see Bombardier as the only alternative. Maybe we were having a bad run but the town pubs in the likes of Rothbury and Wooler had been disappointing on the beer front. 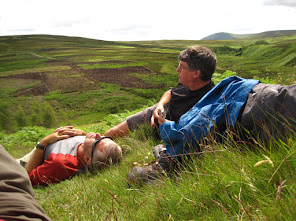 Next day we headed in to the Cheviots for a 10 miles circular following St Cuthbert again until we headed south over Common Burn. Yomping across a grouse moor brought us to a grassy bank in the sun – one of those old blokes Last of the Summer Wine moments where life feels good and it’s difficult to move after stoking up on sandwiches. We headed north-east to re-join our pal St Cuthbert and back in Wooler it was tea shop time with a hefty slice of Border Tart.

We grabbed a lift with reliable Ron’s Taxis to Alwinton to the south of Wooler. It was a day of thinking what might have been as we seemed to spend the day looking through the windows of remote village pubs. There’s still a long way to go before we reach the end of pub closures. Up here the town pubs seem to struggle to attract the visitors and many village pubs survive until the owner dies or incomers make a lifestyle choice to run a pub. We left Alwinton, sadly missing out on the Rose & Crown and caught up again with the River Coquet. On to Harbottle and a look at the Star Inn. Limited opening and a sad notice saying the pub might not open due to ill health. 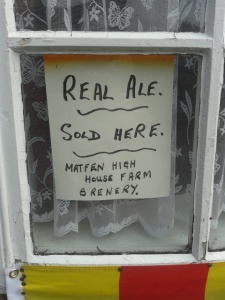 Point of sale at The Star

Another battle through near impenetrable forest with army shelling booming in the Cheviots and we emerged into Holystone. A private house with the Salmon Inn pub sign still hanging, reflecting recent planning battles to save the pub. Imagine a day’s fly fishing on the Coquet and then pints in the Salmon – grand days of yesteryear no doubt. We moved on, avoiding rampaging heifers – much snorting and ground shaking and that was just the walkers. Lunch on a bend in the Coquet, a few meanderings and we picked up a footpath through endless fields of waist high crops. Outside the National Trails and National Parks footpath maintenance and signage these days seems poor – odd for places that need the tourist trade.

Finally we reached Thropton desperate for a pint. The Three Wheat Heads beckoned with Allendale’s Golden Plover and Mordue’s Workie Ticket quenching our thirsts whilst we extracted grass seeds from our boots in the garden. We passed the Cross Keys – yet another neat village pub that didn’t fit in with our schedule that day. Up the hill out of Thropton and on to the high road into Pondicherry and Rothbury. Tea & cakes and back to our billets before heading off to the aforementioned Northumberland Arms at Felton for Allendale beers and quality nosebag.

All in all a fine week of walking that gave us coast, river and moorland. Some decent pubs but also time to reflect that all is not well in England’s pubs – some with not much idea, some with not enough business but thankfully some that recognise if you’re good and interesting the punters will come.