(Pubs are wonderful places but our NHS workers are even more wonderful. Please do the right thing by them and our vulnerable ones over the next few weeks.)

As someone who usually has to be dragged out of the Peak District I’ve done some exploring in the last few months. As an obsessive I couldn’t leave home without a bit of research and a spreadsheet or two about bars and breweries. With help from the internet and beer Twitter it seemed safe enough to leave the land of village pubs and brown beer.

You’ll be pleased to know this isn’t a travelogue, albeit without an Alan Whicker voiceover. It’s more my reflections on how pubs and bars, across the globe, often seem very different but how the essence of the good ones is remarkably similar.

My journey starts in Ushaia on the southern tip of Argentina, a typical navy town that might not be the perfect stop for Brits. We played safe and headed for a craft brewery tap. Faced with a closed sign we moved on and warily approached a nearby old but garishly painted corrugated iron building with neon signage. ‘Bar Ideal’ it said, we’d be the judge of that.

It was a sports bar, decked out with navy memorabilia, shirts and the inevitable TV. Not a sports bar in modern parlance, it had more of the lovingly and gently battered air of Woodies in New Malden. 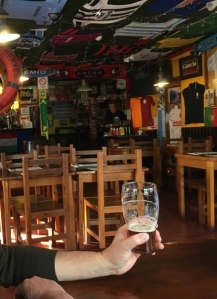 We approached the bar to see the beers on offer, in our typically British blokes way. We were ushered back to our seats followed by the main man, in his typically Argentinian way, with his drinks and food list.

Our Spanish was as good as his English. Negligible, apart from Mrs TWM. I’m not sure how it happens in a pub or bar but it became clear that, even without a common language, we were going to get along fine. We liked his Beagle beers and him and he liked us.

In the manner of a one-man Sam Smith’s he laughed at our enquiry about wi-fi. He smiled as we wandered the pub (it no longer felt like a bar) admiring his football and rugby shirt collection on the walls. We were welcomed into ‘his place’ and he realised we were happy to follow his benign unwritten rules, he was ‘the guvnor’. Before we left he turned to Mrs TWM, nodding in the direction of me and my mate Chris and said, “muy simpatico’. We felt much the same.

The pleasure of a new pub is the possibility that when you open the door something magical will appear. In the difficult times we’re in at the moment I increasingly realise it’s not the beer, it’s not the building, it’s the humanity of the places I’m missing.

Those shirts, the navy memorabilia and the indefinable feel of the place reflected the essence of the publican and his customers. A human warmth that passes all understanding.

In between trips abroad we needed a local stroll and headed along the Limestone Way from Elton to Winster. The White Peak at its best. Rolling green fields tidily wrapped with stone walls. A landscape cleared and created by man but none the worse for that.

We emerged at the top of Winster village and passed the Miners’ Standard. A pub that in our minds had gone downhill from our memories of years ago. We knew little of its recent history despite it being on the doorstep. It was a mystery apart from a new pub sign and a minor wash and brush-up on the outside.

I persuaded Mrs TWM to turn round and give it a try. Halves and out the door if it hadn’t changed, I promised.

The door opened on to a place transformed. Not in a gastro pub way and really not much of a physical difference. Spiritual or metaphysical change? Or perhaps ‘it just feels different’ is easier to accept.

It had a life inside, village life. The lads at the bar happily moved aside to let me see the pumps. Bass was a surprise find but it didn’t really matter that the beer was so good.

The women serving were friendly in a ‘perfect pub’ manner. This place had evolved, not been manufactured in a training manual. By the time I got back through the throng, Mrs TWM had established ‘village across the dale’ credentials and been told what a difference the licensees had made to their village. It was their pub and the locals’ pub, but we were a part if only a transient part of the joy. Please come back the locals said. We will.

Just like the Ideal Bar, some 6,000 miles away, we were guests in somebody else’s pub world, but very welcome guests.

And then to Bruges. Wonderful beers and bars aplenty. Great advice from beer Twitter with promises of forgotten nights from 11% Tripels.

Strange then that our favourite was a simple neighbourhood bar that closed at 8pm in the evening. Volkscafe Sint-Jakobs was essentially Tom the owner. A gentle soul who enjoyed music from a gentler era.

The walls were covered in albums from the 60s and 70s, some classics, some cheesy. The music matched, as did the atmosphere, but strangely not in a nostalgic way. Just delivering a gentler pace. 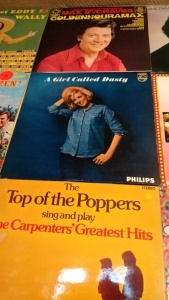 Like all the pubs I’ve described it set its own tone. It walks its own path. Beers to enjoy and relax with. It was a place intent on doing things its own way and welcomed you to be part of it.

See you on the other side. Take care all.

It was inevitable in the current crisis that I would have to announce the postponement of National Bass Day (now cancelled – please see below). From an idea that started over a pint of Draught Bass in a village pub in the Peak District it’s grown into a wonderful campaign that’s been supported by many.  My heartfelt thanks to those who’ve supported the idea of a crowd-sourced list of Bass pubs culminating in National Bass Day.

I’m sad, but more importantly, I’m extremely sad for those publicans who sell Bass and have been so supportive of the campaign. I wish you well and promise the Bass drinkers will be back.

Given the current circumstances (as at July 2020), National Bass Day 2020 is cancelled. Why not have a pint or two of Bass locally on 22nd August to celebrate this great beer.

Obviously if some pubs are open (or doing take-away Bass) and on Easter Saturday this year by all means enjoy your beer. However keeping the NHS going has to be everyone’s priority. If you’re at home on 11th April. pour yourself a beer and raise a glass to a day that will come again.

All the best.  Ian