This a guest post by Richard Barrick sharing his memories of Bass, Burton and the brewing world.

“As a lifelong ‘Bass man’, (Dad worked for Bass North 1972-86 and quickly learned Draught Bass was ‘the Rolls Royce’ of beers), it’s absolutely brilliant to discover I wasn’t the only one who appears to care about the existence of this ale and brand!

I first drank Draught Bass at a free house on the A19 south of Selby in 1979/80. Bass at that time was still fermented in the Burton Unions within the then No 2 Brewery on Station Street. I still believe that that the ale I got to know, love and be constantly amazed by until it began changing in the mid 1980s, was the finest beer I’ve ever had. I don’t think today’s version is in the same class (my opinion) but I do think it’s got better and better in more recent years at Marston’s. And love it still I do but as I say to everyone, a bit of it is ‘drinking from memory’! 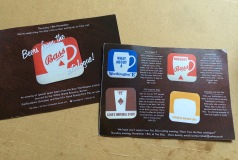 I spent 20 years in advertising creative departments, including writing the print/poster campaign for Ind Coope Burton Ale in 1989.  but following and creating trends as part of the job could run counter to what I thought really mattered. In this way, as a reaction against the cyclic pattern of ‘foreign bottled lagers’, I began nuancing the company Christmas parties by bringing in cask ales and regional British foods of the sort that I feared, big budget ad spends could advertise out of existence. Dubbed ‘BarBarrick’ the parties introduced many an amazed ad executive to the delights of cask English beer, pork pies, black pudding etc etc!

In around 2010, I got to know the owner of a then Bass outlet, The Ship in central London. A former Wenlock house, his father had built it into quite a temple to Bass and it was their only cask ale. With his blessing I organised the arrival of cask Worthington ‘E’ and a firkin of P2 (both recreated by Steve Wellington in Burton) for a famous night where all three were on sale, hand pulled, in a central London pub! ”

Note: Richard runs Mr Barrick’s Pies, producing the only pork pies with a steam hole offering the glory of a red triangle. Hopefully when National Bass Day takes place sometime in the next few months, Richard’s pies will be gracing the bar of the Derby Inn in Burton.