I recently spent a few days in my home town of Burton, and like many other places, the UK’s capital of brewing seems to have followed the trials, tribulations and, more recently, triumphs of the beer world. After those years when Burton Bridge Brewery seemed to fly a lone flag of independence in the face of lager factories and takeovers, the glorious Coopers’ Tavern was abandoned by Bass as its brewery tap, and the Bass Tower was rebranded as Molson Coors it feels like we’re over the worst, at least for local drinkers*. 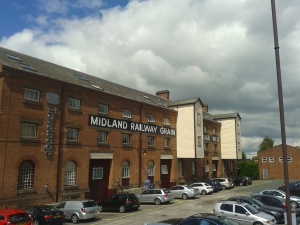 Gone for a Burton

The closure of pubs by the big chains and the financial advantages available to small brewers have created opportunities for those who spotted market gaps. Whilst the metropolitan centres often feel that they’re leading the way, changes are afoot across the UK and Burton’s catching up.

Burton Bridge offered proper pubs in the town and Joules revived the Coopers but the town centre only offered the inevitable ‘Spoons, The Lord Burton, for those seeking a decent choice of beer. It’s been all change in the town in recent weeks (see the article by Nik Antona in the Burton Mail [23 May] for more details). 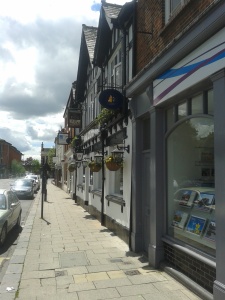 I hadn’t stepped into The Dog Inn since the days it was the domain of Dave Mackay of Tottenham and Derby fame. Strange to think of yesteryear when top footballers often left the pitch to spend time in pubs (sometimes as a landlord).

The Dog lost its way but it’s now been taken on by Black Country Inns. They’re a small chain brewing classic West Midland ales and offering a good selection of other hand pulled beers using swaps. As well as real ales, craft keg is also expected shortly. The landlord’s rightly enthusiastic about his pub & beers and the pub is pulling in a happy band of customers. (A thought – these days shouldn’t a pub called The Dog Inn have an outside area lit by flashing torches?).

Just down the High Street in William Worthington territory, the former Blue Posts was home to my younger Bass drinking days and like The Dog it’s gone through endless fizzy lager based concepts only to come out the other side to be opened as The Crossing Ale House and Kitchen (part of a small Derby-based chain). Whilst I’m not convinced about fish & chips in a wooden box it does provide a gastro pub and more beer choices in the town. With a few micro pubs opening as well, the drinkers’ life in Burton is much improved.

I finished my visit with a stroll down Station Street towards the Allsopp’s end of town. It’s impossible to walk past the Coopers and Burton Bridge Brewery’s Devonshire Arms – both too tempting. The Devonshire is the epitomy of an ‘old school’ pub. Nothing fancy but for my visit it was the perfect mix of a friendly welcome, a good choice of reliable and good value BBB beers (none of your mucky London beers here) and regulars welcoming visitors into their discussions.

After many years the old home of Britain’s brewing is living up to its reputation. Who’d have thought it, Burton as a destination for beer drinking and a League 1 football club. It’s time for a visit.

*Apologies to lovers of Pedigree, as I’ve said before it’s just not my cup of barley water.

We embarked on a pre-Christmas dads and lads outing to St Albans’ pubs – it was difficult to work out who was leading who astray. Enough to say that any evening that starts with winter ales, has a middle of pub carol singing with St Albans’ Morris folk and ends with a kebab is unlikely to result in much erudition. However, somewhere in the mists of drinking, some of us (i.e. Clive and myself), discussed the problem of IPA. At The Goat pub the dads had gone for Redemption’s Big Chief IPA and a couple of the lads had chosen Well’s Eagle IPA (or whatever they are calling it this week).

Whilst Clive would even ask for a blood transfusion to have added Citra hops I’m more of a roasted malts man but we can agree on a beer needing some taste and complexity. The Well’s IPA tasted of – well it didn’t have a taste to be frank, whereas the Big Chief was full of flavour including some citrus stuff but so much more than a ‘we’ve bunged in a load of Citra hops to make a strong beer that’s like alcoholic bitter lemon’.  Anyway pity was taken on the errant lads and extra pints of Big Chief were purchased to much acclaim.

The essence of my complaint about IPA is that as a description it’s now about as much use as teats on a bull. A Google search has over 680,000 results for “India Pale Ale” reflecting the fact that it has become a meaningless term of no use to the beer drinker e.g. someone explain black pale ale to me. But in a way, worse than meaningless given that it’s become a label used to sell any old (or even new craft) sludge.

In my early drinking career Worthington’s White Shield was a good bottle-conditioned standby in Burton’s pubs and a useful finish to a night when another full pint was unnecessary. It was a classic IPA (I mean to say was) and today it remains a ‘proud member’ of the Molson Coors’ Global Portfolio…in fact they’re so proud of it coming from Burton on Trent (sic) they even illustrate the Worthington’s White Shield web page with that beautiful corner of Burton otherwise known as Dunsop Bridge in Lancashire. Marketing muppets.

Anyway enough of my anti-Coors ranting, I don’t ask for much, so please dear brewers if you label a beer as an IPA make sure it tastes of something, that it’s more complex than an alcoholic bitter lemon and remember its origins as a Pale Ale.

As a Burton-born boy I now view from a ‘down south’ distance the marketing triumph that is Marston’s Pedigree and the corporate failure to manage the Draught Bass brand.

I grew up in a Burton world where roads were criss-crossed by the spider’s web of brewery railways, pubs seemed to be on every street corner and more than a few blokes had taken advantage of drinking beer at work. I thought every town had a smell of spent yeast and Marmite. And the joy of a summer holiday job with free beer in the canteen. It wasn’t just the workers – I remember having to carry a case of beer up to the Bass board meeting for ‘tasting’.

Time moved on and drinking choices in town became clear – Ind Coope’s Burton Ale, Marston’s Pedigree or Bass. Whether it was the choice of pubs or the taste of the beers, it’s lost in nostalgia but I’d hope I’d been able to recognise that Burton beers are not all the same. Pedigree to me is so sulphurous you might be drinking water from a volcanic lake, Burton Ale was too much for a session but Draught Bass was the business.

As I’ve said before it’s just my taste but if I’d had to predict a beer capable of national success as real ale became mainstream it would have been Bass. A great brand in the UK and abroad, perfect for a session and a superb traditional bitter taste. In Burton it even had a tower named after it – until Coors rode into town.

Where is it now? It’s a stand back in amazement moment when you see it on a bar. Too many times recently I’ve stared wistfully at that Bass triangle on the outside of a pub only to face the inevitable Doom Bar inside. It’s easy to say it’s not the same Bass taste anymore but there’s still a hint of what might have been when it’s gently supped. (Congratulations to the Shoulder at Barton for keeping a very good pint.)

From a business perspective Marston’s has done a superb job on placing Pedigree as one of the key contenders for a real ale national treasure. Its sponsorship of England cricket hits the perfect demographic, the advertising pulls gently on nationalistic heartstrings and then there’s the taste (oh well you can’t have it all). They started with product, some regional brand-strength and a growing market and they’ve achieved wonders.

On the other hand InBev had the national (even worldwide) Bass brand – the perfect session product for the only growth market in town and they’ve failed completely and utterly. On the AB InBev website Bass is categorised as a lowly ‘local champion’ and without a hint of irony they note that “the brand has had an incredible pedigree (my italics) for centuries”. The marketing maestros probably don’t even realise it is brewed by Marston’s these days.